Hurricane Katrina is Yo Mama! 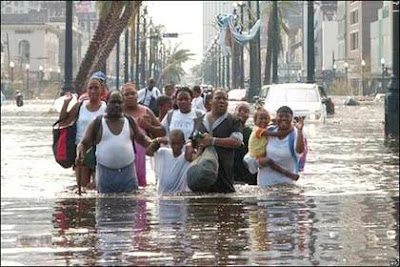 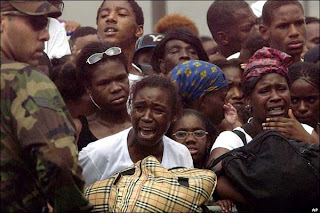 If that's the only way to get Americans to rouse from their stupefaction, look at her and own her, then I will say it--I will shout it far and wide from the flooded American rooftops and from the shores of the sea of oil floating on the surface of the Gulf of Mexico that CNN is not showing us on TV. I'll shout it out: Hurricane Katrina is yo Mama.

Do you see the family resemblance? Hurricane Katrina was not some strange alien event on some other planet, like planet Iraq, for instance; no, she rampaged in your country, on your shores, and those were our fellow U.S. citizens promised protection from the benevolence of a billion dollar payed-for-by-our-damn-tax-dollar government apparatus called FEMA and HOMELAND SECURITY; citizens just like you and I, who were humiliated, abandoned and killed dead by Katrina, Yo Mama. 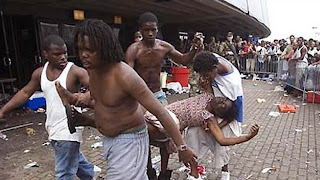 Of course, she had a lot of help from an idiot president who kept on playing golf as the reports came in of Black men, Black women, and Black babies dying of shock, thirst, and hunger, as the reports came in of old Cajun men drowning to death in their stifling attics, of old white women in wheelchairs dying from lack of heart medication and poor, working class children contracting dysentery and tetanus from sitting and lying for a week in foul sewage water, and of old people who developed gangrene from cuts and wounds that filled with pus, and became contaminated by the feces that caked on their bodies--the president took another swing with his nine iron, looking for that elusive bogie, and he paused only long enough to chuck his criminal FEMA director Michael Brown under the chin and praise him, like a fellow frat boy done good, "Brownie, yer doin' a heck of a job!

Yo Mama, Katrina, is the statue with her torch of freedom looming over Ellis Island; she's Mother Justice, blindfolded, holding her sword of justice and the scales of judgement, whose statue stands in glorious sunlight at the top of the stone stairs of the courthouse where you go seeking after justice and receive the tip of her sword instead, and she sticks it where the sun don't shine; she's the American Goddess, Columbia, whose image is stamped on movie studio frontispieces, on U.S. coins, and on savings bonds.

Yet she does not save. Katrina's victims were the colored, the aged, the children, and the poor--everybody America despises and abuses day in and day out and she did not save them, she killed them. As Lou Reed says in his song, "New York," in a laconic, ex junkie voice, "Give me your tired, your hungry, your poor, I'll piss on 'em. That's what the statue of bigotry says.” 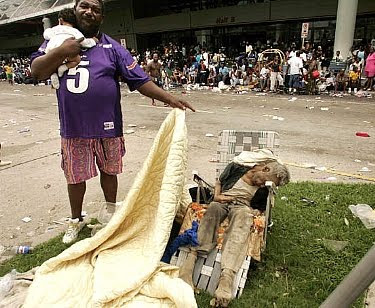 Just as our corporate media is loath to tell us anything that's actually happening around us other than who wants to be a millionaire, and who the latest American idol is as we stumble with the stars and dance on our own graves, so also our schools and our universities don't teach us how to read and write anymore or teach us how to do research that would alert us to the fact that the same corporations that are now moving in to take over the land in New Orleans that was evacuated by Katrina victims, and those same schools and those same universities that are not teaching us anything other than how to 'dress for suck-sess, which means a dead end service industry job with no benefits and no future, these very same corporations and schools are locked in a marriage of convenience, bound for privatization and for profit's sake and government control for power's sake.

Katrina was an excuse to take off the gloves, and let nature takes its course--genocide by water and wind, and it'll happen again, and again, and again.
There is an earthquake/hurricane/flood/fire coming to your town, and you too, will find yourself standing on your roof waving a bedsheet at passing news-copters that don't lower you a rope, don't call for the national guared for you and don't give a shit about you as they film your terror, your thirst, your hunger and your death and your family's death for broadcast--details at 11. "You don't want to miss this one" the anorexic actor and ex model idiot news reader babbles as you die for the sake of Pepsi commercials.

You drink Pepsi, don't you?

We wouldn't know reality by now if it rained down on us and flooded us out of our houses. We wouldn't get the picture is we saw it on CNN:

No, we wouldn't, because that's somewhere else. Somebody else. That's not my Mama dead and bloated and floating in the flooded streets, that's...somebody else's Mama, isn't it? 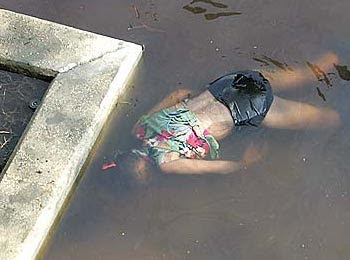 No, because Yo mama is Hurricane Katrina itself, and Yo Mama did this, but it was yo daddy--the 21st century corporate government (also known as corpomerica, alias Papa fascism--check the encyclopedia definition) who turned what Yo Mama did into an industry long before 911, Katrina, or the earthquake that killed thousands of Haitians ever even happened.

As a reporter at Rense.com says:
The mainstream media was quick to focus the public's attention on the "LOOTERS." Perception control at it's worst. According to various eyewitness accounts, most looting was done for survival purposes. (9-1-5) --"This is a dispatch from New Orleans from Dr. Greg Henderson, a pathologist who recently moved from Wilmington...."

"The city now has no clean water, no sewerage system, no electricity, and no real communications. Bodies are still being recovered floating in the floods. We are worried about a cholera epidemic. Even the police are without effective communications. We have a group of armed police here with us at the hotel that is admirably trying to exert some local law enforcement. This is tough because looting is now rampant. Most of it is not malicious looting. These are poor and desperate people with no housing and no medical care and no food or water trying to take care of themselves and their families."
-http://www.rense.com/general67/email.htm

He goes on to argue that disaster management, managed chaos, and controlled mass death are exactly what our corporate masters have in store for us for the foreseeable future. Why? to insanely wipe out the human race? Naaaah, you can think better than that even half asleep as you are. Our master doesn't want to depopulate the Earth, oh, no, but rather simply wants to TRAIN us with suffering, fear, lack, hunger, thirst, poverty, tragedy, and disaster. Sure, millions will go on dying, especially in Africa, but the YOUTUBE conspiracy straws, seeds, and nuts who argue that genocide is the goal are thinking far too small. It would be too easy if that were the answer. We could all just cross ourselves, bend over and kiss our asses goodbye--no more struggle to go through, here we come for our reward and our wings, there'll be pie in the sky as we die.

But no. Our master has something more sinister in mind: obedience training.

Is that really so hard to believe? 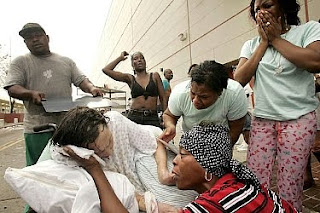 These are the same corporate masters who transported us by the millions across the oceans in wooden ships shackled to the bottom of the holds puking, bleeding, dying, screaming and moaning in our own filth (hey...sounds like the New Orleans masses trapped inside the Superdome during the storm, doesn't it? Gee, what a coincidence), and then sold us on the block into three centuries of brutality, illiteracy, and chattel slavery--

--To kill us? No. to use us to build the infrastructure and the economy of two continents. These are the exact same people who built death camps for profit and transported millions of Jews by steel rails to those camps to be methodically put to death and have their skins stripped from their corpses before burning and the skins made into lampshades. Did they hate Jews? Probably not, not those in charge of the entire thing, anyway, because as Himmler was reported to have said, to 'actually hate' these Jews would be foolish, would be self indulgent; the message of 'hate' was for mass consumption, not to be believed by the masters of German society, only by the brainwashed, propaganda shocked, gutless, obedient German masses. Nazi Ubbermensch, Reinhard Heydrich, eating pastries and drinking schnapps at the Wansee Conference in Berlin in 1942, where the "Final Solution" was hammered out (with Loki's hammer, no doubt) opined that the 'Jewish question' was one of logistics and technological efficiency, not of emotion.

In other words, after the scapegoat was wiped out, the Nazi's would surely have not shut down all that nice, modern, efficient mass death machinery--they would have fed new victims into the ovens: anybody who resisted them, in other words; in other
Posted by Rayfield A. Waller at 9:54 PM 2 comments: Links to this post